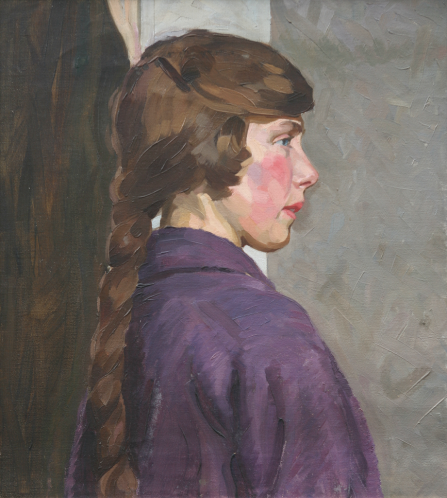 Born Jill Byth in Quidenham, Norfolk, she was educated at Cheltenham Ladies College, showing early promise as an artist. In 1915 she moved to Cornwall to study under Stanhope Forbes. Here she lived with her mother at Myrtle Cottage, known as ?the Myrtage?, home to many of the female students of the Forbes School. She worked in portraiture, still life and embroidery. While studying she met her first cousin Geoffrey Sneyd Garnier, marrying in 1917 and settling at the Orchard Cottage in Newlyn. They had 3 children, 2 boys and a girl. Her family responsibilities stood in the way of consistent work, but she continued to paint in oils, design and create beautiful embroidered pieces. She was known to complain bitterly about the lack of time that a woman painter with a family could devote to her work. The influence of Forbes on her portrait work is evident, her works of the family and pets, dating from the early 1930s, are considered her best portrait groups.