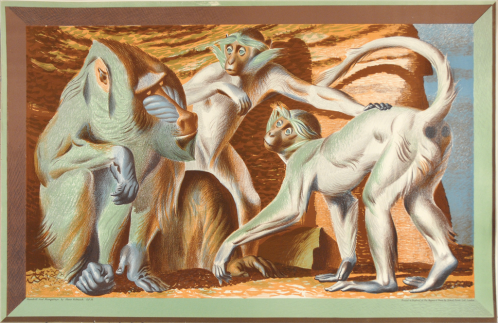 German Jew born in Frankfurt au Main, Feibusch was best known as a mural painter. In 1916 he was conscripted and sent to the Russian Front, when he returned he attended the school of Stanislas Stuckgold and by 1920 he was a master student of Carl Hofer. 1921-3 he travelled to Italy, sparking his interest in mural work. In 1925 he joined the Frankfurt Artist Association, participating in many of their group exhibitions. In 1932 the group complained they were not receiving any official commissions from the local government. Soon after they received a new member, who later revealed himself as an SS officer, pointing at the Jewish members announcing that they would never show or sell their work again. In 1933 he moved to London with his future wife and 1935 joined the London Group, alongside artists such as Graham Sutherland, Duncan Grant and Matthew Smith. 1937 he was part of Goebbels? infamous ?Entartete Kunst? or the Degenerate Art Exhibition, exhibiting alongside artists such as Schwitters, Hofer and Chagal. In 1938 Feibusch was made a British Citizen and received his first mural commission for ?The Footwashing? at the Methodist church in Colliers Wood. In 1967 Germany awarded him the German Order of Merit 1st Class. In 1970 he suffered from cataracts, during his recovery and feeling frustrated he began to attend local sculpture classes. This sparked an interest in sculptor and saw a number of future commissions. Religion was instrumental in his life but after 20 years of being a Christian in 1992 he left the Church of England, having been deeply affected by his research into the holocaust. In the last years of his life he mainly worked in pastels. 1995/6 he was able to attend a UK touring retrospective of his work, organised by Pallant House Gallery. He continued to work until his death, just weeks before his 100th birthday.