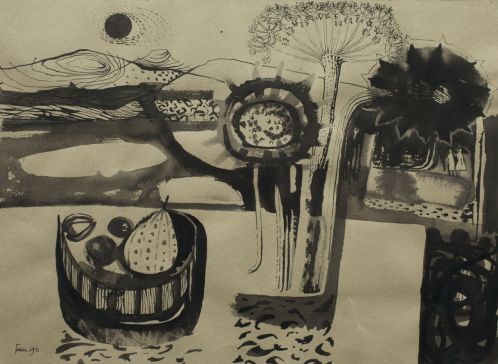 Born in Bristol, Fedden studied at the Slade School of Art 1932-36. During World War II she served in the Land Army and Woman Voluntary Service, having settled in London she then worked as a stage painter for the Arts Theatre in Great Newport Street and produced propaganda murals. In 1944 she was called up and sent abroad as a driver for the Navy, Army and Air Forces Institute. From 1958-64 she taught painting at the Royal College of Arts, the first female tutor to teach in painting at the school. Fedden had a number of solo exhibitions across the UK, including the Redfern Gallery London in 1953, New Grafton Gallery London 1960, Hamet Gallery 1970, Arnolfini Gallery Bristol and at the Beaux Arts Gallery London in the 1990s. There was a major exhibition of her work in 1996 at the Royal West England Academy. Fedden had many mural commissions including at the Festival of Britain 1951, P&O liner Canberra 1962 and Charing Cross hospital in 1980. She was the president of the Royal West England Academy from 1984-88 and elected into the Royal Academy in the Senior Order in 1992. She also received a CBE.