[jump to content]
You are here: Home » Exhibitions » 2011 » British Impressionists ...and some automata

British Impressionists ...and some automata

The exhibition will show that the tradition of impressionism is still strong today, and will include work by major contemporary Cornwall-based artists today such as Ted Dyer, Robert Jones, Andrew Tozer and Ben Warner.

Displayed alongside will be masterpieces by Falmouth's automata makers. These are bound to make a good impression! 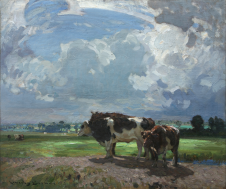 Crosby, Anthony (born 1958): Not as weird as fish, automaton, 42 cms high. Commissioned in 2004 with grant aid from the Esmee Fairbairn Foundation.