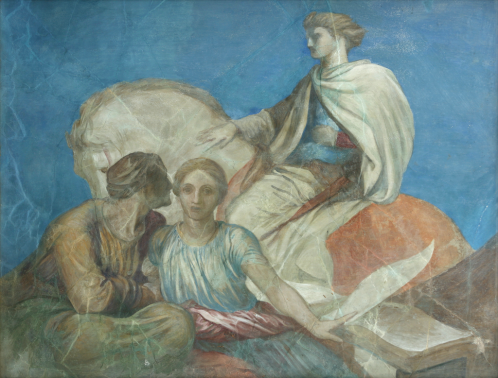 This painting depicts the vision of Britomart, patroness of fishermen, sailors and huntsmen from The Fairie Queen (1590) by Spenser. On the horse is Artegal, the symbol of justice.

George Frederick Watts was born in London on 23rd February 1817, son of George Watts, a maker of musical instruments. At the age of ten he was apprenticed to the sculptor William Behnes. He entered the Royal Academy Schools in 1835 and won £300 prize money in the Westminster Hall Competition in 1843. With the money he visited Italy, where he stayed in Florence with his friends Lord and Lady Holland. He returned to London in 1847 when his composition 'Alfred' won first prize in the House of Lords Competition. Despite this success he did not attract a great deal of commissions and, further depressed by poor health, he became the guest of Mr and Mrs Thorby Prinsep at Little Holland House until 1875. Watts became the centre of intellectual circles in London and his reputation grew. He said he was a painter 'of ideas, not things' and his large paintings concerned with moral and philosophical issues became highly regarded at the Royal Academy. In 1867 he was elected an Associate of the Academy and was made an RA in the same year. During the 1880s, exhibitions of his work in Manchester and New york established him as a leading Victorian painter. He twice refused a baronetcy, in 1885 and 1894, but finally accepted the Order of Merit in 1902. He died in Guilford on 1st July 1904.