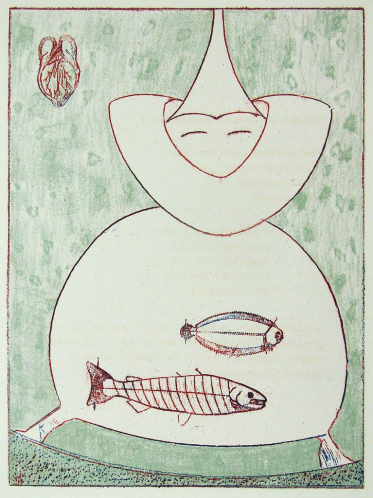 German born painter, sculptor and printmaker; he was one of the leading Surrealists. He studied Philosophy at University of Bonn in 1909, where he developed his interest in painting. Ernst was self taught, influenced by artists such as Van Gogh and Macke. In World War 1, he was an artillery officer. Paintings of de Chirico helped stimulate his interest in dream-like fantastic imagery, leading him to establish the Cologne Dada group 1919-21. He made collages and paintings with irrational combinations of imagery. His first solo exhibit was held at the Galerie Au Sans Pareil in Paris 1921. A year later he moved to Paris where his friendship with Breton and Eluard, encouraging him to get involved with the Surrealist movement. In 1925 he discovered the technique of frottage (rubbing), which enabled his work to evoke a hallucinatory vision. In 1941 Ernst went to the US as a refugee, first living in New York then Arizona. From 1950 he mainly lived in France. In 1954 he was awarded the main prize for painting at the Venice Biennale.