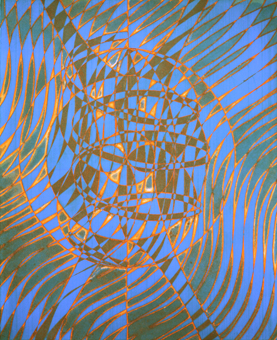 Stanley William Hayter was one of the most important print makers of his generation, influencing both Surrealism and abstract expressionism. He is said to have influenced Picasso, Giacometti, Miro, Calder, Chagall, Pollock and Rothko. At the time this print was being made, Hugh Stoneman was in Paris studying under Hayter.

Hayter was an English printmaker, draughtsman and painter, active in France and the US. In 1926 he settled in Paris, studying burin engraving at the Academie Julian. In 1929 Yves Tanguy and Andre Masson first introduced him to Surrealism. The violent imagery used in his Surrealist work was in part response to the Spanish Civil war and rise of Fascism. In 1939 Hayter went to New York, experimenting with automatism and expressive abstraction, work that influenced Pollock. During the 1930s he experimented with traditional black and white etching and engraving techniques. In 1940s he focused on colour printing. In the 1950s, having opened his workshop in Paris, he experimented with colour etching, contrasting viscosities applied with rollers onto the plate, etched to different levels. This suited the increasingly Tachist look of his prints in which he explored his fascination with waves. From the 1970s he started to reintroduce figurative elements, producing some of his more fluent and imaginative works.