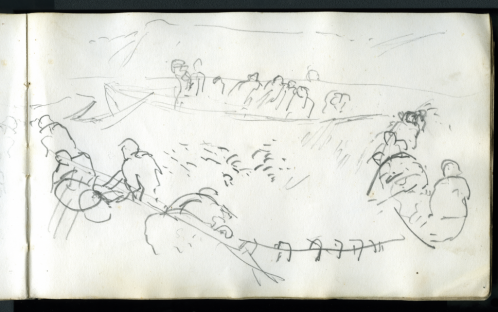 This sketchbook contains studies of pilchard fishing for the painting 'Pilchards' which now resides at Tate after being bought by the Chantrey bequest for £1,200 in 1897.
The Pilchard catch was one of the main tourist attractions of the Cornish coast , and Hemy noted "Pilchards was painted from sketches altogether except where I posed the models to finish the figures. The studies extended over fourteen years from the first idea to the last study of the sky. The picture was painted in 10 days. It is unlike anything I have done and unlike anything I have done since for it was a subject impossible to repeat in any way.