Charles Napier Hemy was the leading maritime painter of his generation and Falmouth's first Royal Academician. He was appointed Official Painter to the Royal Yacht Squadron and was a prolific exhibitor at the Royal Academy. He settled in Falmouth in 1881, and produced the majority of his finest works here.

John Singer Sargent's visit to Hemy's Falmouth home 'Churchfield' in 1905 highlighted the circle of important artists that surrounded the great marine artist in the town. 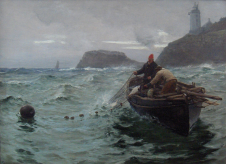