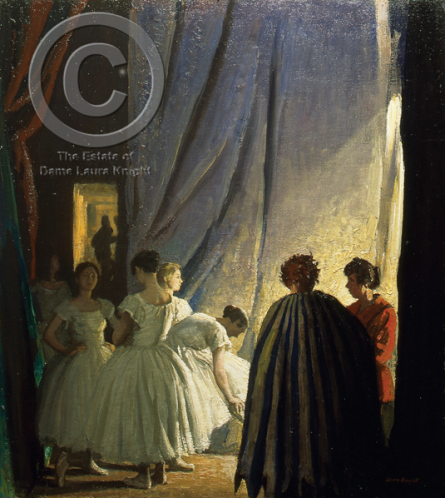 view frame
A version of a ?Whistler? reeded frame from the 1870s, oil-gilded directly on oak and supplied by J. H. Steer of 2 Ridgmount Street, London.

This painting probably dates to the early 1920s, when the artist had gained permission to paint dancers from the Russian Ballet by Diaghilev.

Dame Laura Knight studied at Nottingham School of Art and the Royal College of Art. She and her husband, the artist Harold Knight, were a force in British art. Between 1908 and 1918 they lived and worked in Cornwall, where they influenced many artists. She publishes her autobiography, 'Oil Paint and Grease Paint', in 1936 and another volume, 'The Magic of a line', in 1965, providing a valuable account of the community life of artists in Cornwall. The Knights were friends with William Ayerst Ingram (1855-1913) and were staying with him at Witton Villas, Woodlane, Falmouth when the 1911 census was taken. Both Laura and Harold exhibited at the first Falmouth Art Gallery in Grove Place, which was founded in 1894 by Ingram and Tuke.