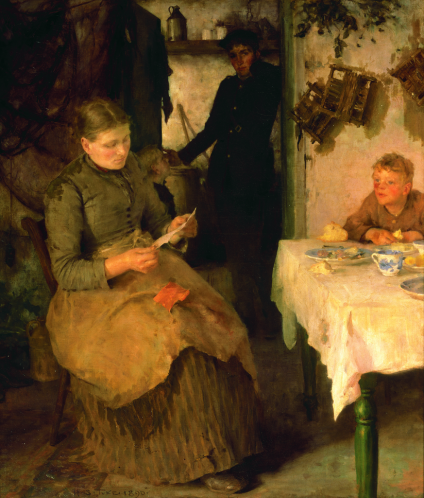 view frame
A nineteenth-century version of the British ?Watts? frame, decorated in applied composition, with acanthus leaf ornament, spindle and triple bead, frieze with mitred joints, and leaf-bud sight; finished with oil-gilding, the frieze gilded directly on the oak.

Painted in the kitchen of the cottage at Pennance between April and November, 1890, this painting shows the artist's home at Swanpool and Tuke's housekeeper, Mrs Fouracre and her two sons, Georgie (who also appears in "Noonday Heat") and Richard, together with William J.Martin, who was in real life, as he appears in this painting, a Post Office messenger boy. R152.