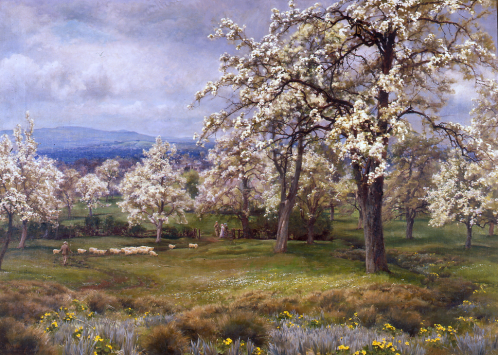 view frame
British or Continental Neoclassical-revival fluted scotia frame; top edge flat with ripple moulding; wide scotia with cross fluting; stylised acanthus leaf-tip sight; finished with brilliant gilding in the German fashion; possibly a regilded original nineteenth-century version rather than a twentieth-century replica, as the flutes at the corners have been carefully joined across the mitres.

This orchard was on the slopes of the Cotswolds, overlooking the village of Broadway. To the left is Bredon near Pershore and in the background is the spur of the Malverns.

Alfred Parsons was a distinguished landscape painter whose pastoral English landscapes were based on direct observation. He was born in Beckenham in Somerset, the son of a doctor. He studied art at South Kensington Schools from 1865 whilst also working as a post clerk. He was a keen botanist and gardener, and there is a freshness and accuracy of detail in all his work. His paintings were first shown at the Royal Academy in 1871 and from 1871 and from 1874 he exhibited there every year until his death. He became the President of the Royal Society of Painters in Watercolour in 1913.