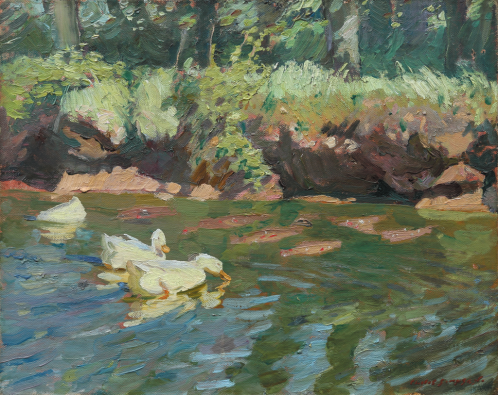 Charles Simpson was born in Camberley in Surrey. He was largely self-taught as an artist apart from studying at Bushey in 1904 under Lucy Kemp-Welch, the well-known horse painter. In 1905 he moved to Cornwall and returned to live in the county many times throughout his life. He was involved with both the Newlyn school and St Ives art colonies, taking lessons from Noble Barlow. In 1913, after a period studying in Paris, he married the artist Ruth Alison and the couple moved to Newlyn. They later moved to St Ives to set up their own School of Painting, which they ran from Nos. 1 and 1 Piazza Studios until 1924 when they moved to London. They returned to Cornwall in 1931 and lived at Lamorna. Simpson won a Silver Medal at the Paris Salon in 1923 and a Gold Medal at the VIII Olympiad in Paris 1924. He exhibited at the Royal Academy and is also known for his literary and illustrative work.