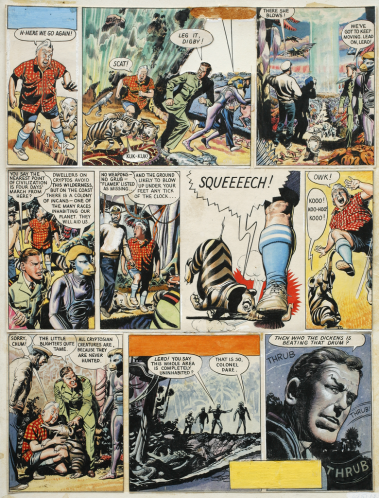 The first Eagle comic was available to the public on 14 April 1950 and immediately achieved a readership of 2,500,000. Dan Dare became an instant success and the main talking point in playgrounds around the country.

When the Eagle dummies were created in 1949 Dan Dare was originally devised as an Interplanetary Chaplain, although this was dropped by the time the first comic was published.

Born in Audenshaw, England, Hampson started his career aged 13 contributing artwork to the ?Meccano Magazine?, a promotional journal for the popular toy. During World War II Hampson served in the Royal Army Service Corps. In 1946 he studied at the Southport School of Art and Crafts. After which he spent some time working as a freelance illustrator, before becoming the first lead illustrator for the popular comic book ?Eagle?. It was then he created his best-known character Dan Dare. He also created a series based on the life of Christ. Having been taken over by a new company, Hampson left ?Eagle? in 1960.