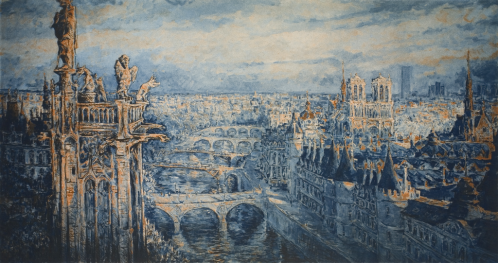 Born in Kiev, to a family of artists, aged 20 his love of art took him to St Petersburg to study at Repin Academy of Fine Art. Having graduated, in 1978 he joined the Union of Young Artists. He sought to master all genres from landscape to still life and portraiture. Refusing to conform to the demands of the USSR ideology, Chepik immigrated with his future French wife Marie-Aude Albert to Paris. Soon Paris became a central theme in his work, painting a number of Parisian cityscapes. In 1995 he returned to Russia causing him irritation and sorrow. He felt the Russian people had been betrayed again, resulting in another wave of politically charged paintings. Throughout his career Chepik approached a variety of themes in imaginative ways, using a virtuoso technique, subtle palette and strong lines.