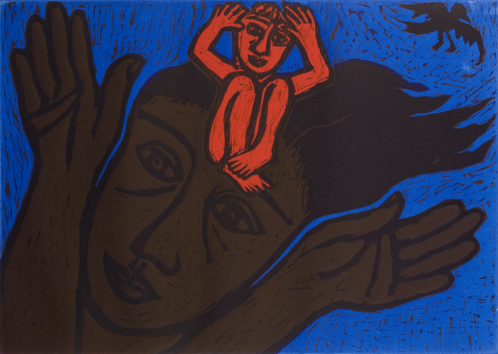 Born in Glossop Derbyshire, Cooper studied at Goldsmiths College of Art 1971-74 followed by the Royal Academy of Art 1974-77. Well-known as a printmaker and painter, her stylised work is rooted in figurative tradition, characterised by the use of bold lines and formal composition. Her images are full of playful and sometimes personal narratives. Cooper held her first solo exhibition was in 1979 at the Air Gallery London, followed by many others at the Blond Fine Art London, Artspace Gallery Aberdeen, Castlefield Gallery Manchester and the Artsite Gallery in Bath. She was a visiting lecturer at the Royal College of Art and City and Guilds of Art School. Cooper was the head of Printmaking at the Royal Academy Schools and in 2011 was made the first female Keeper.