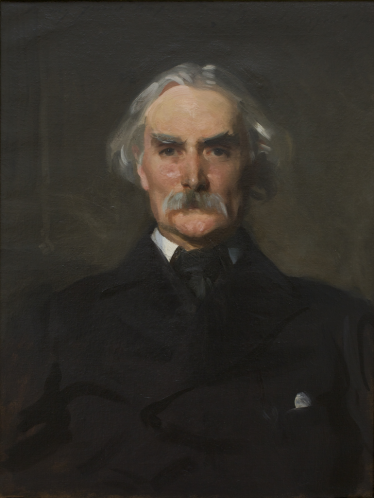 view frame
A British ?Carlo Maratta? frame in the style known as a ?full Carlo?, either contemporary with the painting or perhaps earlier; with plain convex top edge, bound at corners; beading; acanthus-&-shield ornament in scotia; bevel to sight; insert of slip; oil-gilt finish.

This work is the best of four emotionally charged portraits of Sargent's artists friends produced in 1905. In January of that year his friend and neighbour, the painter Robert Brough, was fatally injured in a railway disaster at Cudworth in Yorkshire. Sargent rushed to his bedside in a Sheffield hospital and subsequently wrote the introduction to a memorial exhibition of his friend's work. He was deeply moved by the loss of his friend and this prompted the four emotionally charged portraits of artist friends, each inscribed across the top 'to my friend...'. The portraits are painted with a simplicity and compassionate warmth that places them firmly among his greatest masterpieces.

Sargent stayed at Hemy's Falmouth home, Churchfield, for three days in 1905, during which time he painted this portrait.

Sargent was described by William Starkweather as 'An American, born in Italy, educated in France, who looks like a German, speaks like an Englishman ans paints like a Spaniard.' Sargent studies in Paris under Carolus-Duran, where he adopted the maxim: 'express the maximum by means of the minimum'. He was at the forefront of Impressionism, but perhaps because of his success as Europe's leading portrait painter, his contribution to Modernism is greatly underrated. He was friends with a number of Falmouth artists and exhibited with them at the first Falmouth Art Gallery in Grove Place.