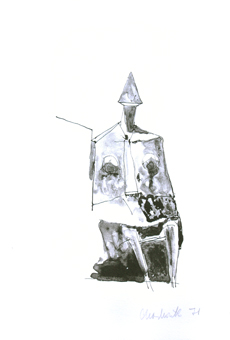 Born in London, Chadwick initially worked for a number of years at various London architect practices. During World War 2 he served as a land labourer, then between 1941-5 volunteered as a Royal Navy pilot. After the war Chadwick began to experiment with mobiles, earning a living as a freelance designer till 1952. His collaboration with architect Rodney Thomas proved to be a formative influence on Chadwick, followed by a solo exhibition at the Gimpel Fils in 1950 and receiving a number of commissions for sculpture from 1951. His work mainly consisted of pieces of iron welded together, filled with concrete resembling a cross between abstract constructs and figurative skeletal beings. Throughout the 1950s Chadwick won a string of prizes, exhibited internationally and received commissions for monumental sculptures. Gradually his pieces transformed from his rough, often aggressive looking animal figures to softer more sentimental compositions with anthropomorphic features. Eventually Chadwick opened his own sculpture park near his home in Lypiatt Park, Gloucestershire. In 1964 he was awarded a CBE and in 1985 he was made an Officier de l?Ordre des Arts et des Lettres. By the time he died at home in Stroud, Gloucestershire in 2003, Chadwick was regarded as one of the best sculptors of the post-war era.