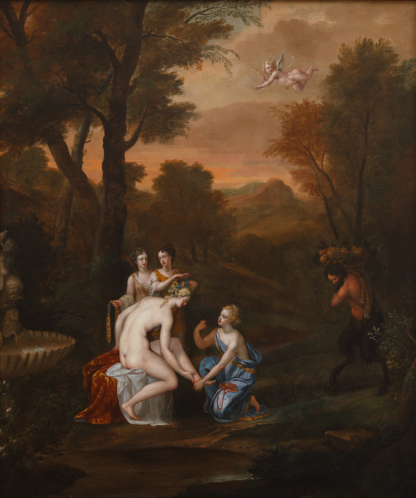 Killigrew, Anne (1660-1685): Venus attired by the Three Graces, oil on canvas, 112 x 95 cms. Purchased with funding from the V & A Purchase Grant Fund, Heritage Lottery Fund, The Art Fund, The Beecroft Bequest, Falmouth Decorative and Fine Arts Society, The Estate of Barry Hughes in memory of Grace and Thomas Hughes and generous donations from local supporters.

Anne Killigrew has been described as the most celebrated female English prodigy of the Seventeeth Century. A poet and artist of great beauty and repute, Killigrew died of smallpox at the age of just 25. Anne?s exceptional qualities as an artist and a poet were highly praised in her short lifetime. The poet John Dryden dedicated a poem to her in which he refers directly to this picture: ?Where nymphs of brightest form appear, and shaggy satyrs standing near? (from ?To the Pious Memory of the Accomplished Young Lady Mrs Anne Killigrew Excellent In The Two Sister-Arts of Poesy And Painting: An Ode?). Anne Killigrew worked at the Royal Court of King James II as Lady-in-Waiting to the Queen. Anne?s grandfather, Sir William Killigrew, was the Governor of Pendennis Castle, and his son, Dr Henry Killigrew moved to London to work as chaplain to King Charles I. He later became master of the Savoy Hospital.